My name is María. I was born in Guatemala and I am a biologist, an entrepreneur and founder of the Wakami system. I am also a mother and a firm believer that collective dreams are unstoppable. My life’s work has been to find ways to link people who are stuck in cycles of poverty to markets that can create cycles of prosperity.

I come from a country that suffered from a  32 year civil war in which much of the infrastructure of the country was destroyed.  The people who suffered the most during the war were always the women and children from our rural communities who faced violence, malnutrition and being displaced from their homes.  The challenges in my country seemed hopeless.

After graduating from Cornell University in the United States as a Fulbright Scholar and with a Masters degree in biology, I felt lost.  My country was suffering and I did not know how to change things.  At one point, I went to a remote village where famine had been declared and women were having to make choices as to which children would eat and which would receive medical care.  They were literally making choices as to which child they loved would live and which child they loved would die.  I asked the people in the villages how I could help. They said: “If you can sell what we produce, the rest we can do.” That simple response changed my life.

From that moment on, I began my journey of connecting remote communities to markets that would buy what they could make.

Over the next 25 years I created value chains for different communities that produced a variety of products that could connect these communities to the markets.  These included the Nativos S, A value chain which is now producing over $1 Million annually of fiber bands for Ron Zacapa rum products; the El Conejo de Sacalá wood products project employing over 500 people in helping the reforestation of Guatemala while also producing income from wood products; and Wakami, an international fashion accessories business which currently sell products produced by rural women in 13 countries around the world.

I learned to transform my discouragement into an energy of creativity. My journey has led me to remarkable relationships with powerful women around the world. I became a founder of Vital Voices Central American network and the Guatemalan chapter.  I am a part of the Vital Voices Global Advisory Council.   I am also part of the Leadership Initiative of the Aspen Institute and have partnered with organizations such as the United Nations Foundation, USAID and Rotary International.

When I was in college during part of the war in my country, I wrote a poem:

I dream of a world in which
The sound of the wind against the trees
The songs of birds from their nests
The jump of a lizard from one twig to another
The footsteps of a deer in the ground
The sound of the spring in the home and Peace between brothers and sisters.
Be everyday events

This dream seemed impossible at the time.  Today I know that dream can come true for those who believe in dreams and refuse to stop trying to make them come true.  As we say in Wakami, individual dreams are powerful; collective dreams are unstoppable.  We hope you will come dream with us.

I have been blessed to receive a number of awards for my work.  In 2007,  received the “Vital Voices Washington Global Economic Development” award, in 2016 the Diane Von Furstenberg (“DVF”) Foundation award as one of the 5 women of the world who create positive change for women. In 2016, Wakami also won The Stephan Schmidheiny award for Innovation in Latin America. I also received the INCAE Challenge Award, as one of the new voices of innovation in business education in the region. In 2017, I received the Fortune Most Powerful Women Award by Fortune Goldman Sachs. For all of these awards, I have been humbled and will always be thankful. 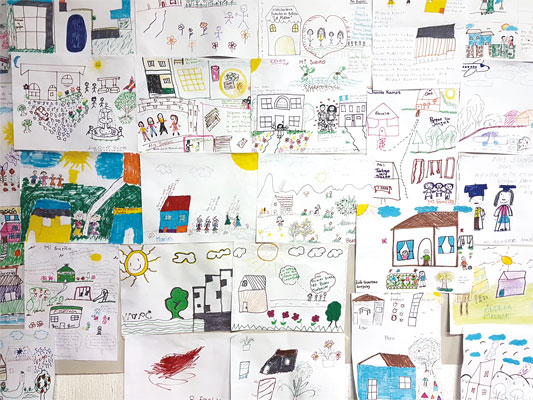 Thanks for subscribing! From now on you'll be the first to know about our news, programs and special events!

Something went wrong. Please check your entries and try again.